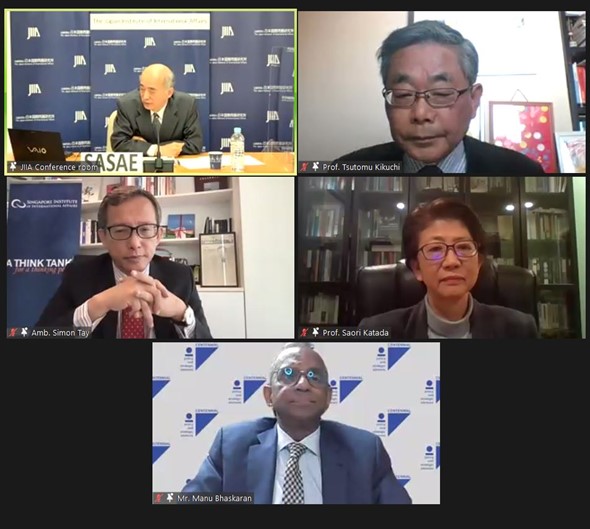 Japan and Singapore share close bilateral ties, celebrating 56 years this year since establishing diplomatic relations in 1966. This year also marks the 20th anniversary of the signing of the Japan Singapore Economic Partnership Agreement (JSEPA), which is Singapore’s first free-trade agreement (FTA) with a major trading partner and also Japan’s first-ever FTA. The annual Japan-Singapore Symposium (JSS) is testament to the strong ties and serves as a key platform that brings together opinion leaders from the two countries to exchange views on their bilateral relations and key geopolitical and economic issues.

This year, the 15th JSS was held on 25 and 26 January 2022. It was co-chaired by Professor Tommy Koh, Ambassador-at-Large, Ministry of Foreign Affairs, Republic of Singapore and Ambassador Kenichiro Sasae, President, Japan Institute of International Affairs (JIIA). The event was co-organised by the JIIA and the Singapore Institute of International Affairs (SIIA). Held across two days, the symposium comprised a half-day closed-door session on the first day and a public forum on the second morning. The public forum was attended by over 280 members of the public, academia, and the private sector from Japan, Singapore and the region.

In their Opening Remarks, the ambassadors noted the Japan-Singapore bilateral relationship is in excellent order and should grasp new opportunities to bring this relationship forward. Japan and Singapore can play an important role in sustaining and developing regional peace, stability and prosperity.

In his keynote speech, Mr Hayashi said amid the challenging regional security environment and the COVID-19 pandemic, Singapore is an important partner for Japanese diplomacy. Japan and Singapore are united in their support of the rule of law, the freedom of navigation and free trade. There is much room for cooperation, especially in strengthening supply chains, ensuring the security of key infrastructure, and preventing technology outflow. This includes cooperation in the following areas-

Dr. Balakrishnan emphasised that despite disruptions to the global supply chain due to the pandemic, Japan has remained one of Singapore’s top trading partners and Singapore continues to be a popular destination for Japanese investments. He highlighted that Singapore and Japan should actively explore even more opportunities for collaboration, such as the emerging areas of digitalisation, innovation, and the green economy as well as infrastructure cooperation in third countries.

Mr. Taro agreed with both foreign ministers. He would like Japan and Singapore to jointly promote cooperation, not only in tackling COVID-19, but also in fields such as green, digital, and third-country infrastructure cooperation in a way that would benefit the region.

Speaking at the public forum were –

Dr. Kikuchi kicked off the discussion with how to deal with the challenges posed to the rules-based international order. He argued, “With China’s increasing powers and assertive behaviours, continued involvement of the United States (US) in the region is indispensable. Through the alliance with the US, Japan have been supporting its involvement and balance of power in the region”. Dr. Kikuchi highlighted the advantages of the Quad – an arrangement between the US, Australia, India and Japan, in supporting the rules-based order in the Indo Pacific and how it can partner with ASEAN.

Prof Tay spoke about the Singapore-Japan relationship and how both countries can further strengthen their ties. “Therefore, if we are all minded that digitalisation is a strength not just for Singapore but also Japan, we should again hope that Japan will consider a digital economy agreement with Singapore as with JSEPA two decades ago this could be another significant spark for us and the wider region,” Prof Tay said.

Dr. Katada highlighted how Singapore and Japan’s strong relationship contributes to the regional economic order, and the acceleration of regional growth through high-quality infrastructure investment. Dr. Katada concluded that “Singapore could be, and I think has been a catalyst for Japan to practically engage in this rules-based economic order in the Indo- Pacific. Assume Singapore has the sense of balance, sense of openness, a sense of communication, and that level of kind of sophistication with the kind of like-mindedness with Japan, it will be a strong bilateral relationship between Japan and Singapore would be a very ideal or suitable partner to put Japan out there and encourage it to be as proactive as a strong leader in the region”.

Finally, Mr. Bhaskaran highlighted three areas in which Japan and Singapore can cooperate within the ASEAN region: help ensure that ASEAN economies realise the capacity to accelerate economic growth such as through infrastructure programmes; help ASEAN become more resilient to the greater financial turbulence that we expect; and both countries can help speed up ASEAN economic integration by promoting cross border trade and investment in sub-regions within ASEAN.

The session focused on areas in which Japan and Singapore can further strengthen ties amid rising US-China tensions and the pandemic. Concerns were raised about how the emergence of organisations such as the Quad and AUKUS could undermine ASEAN centrality. Prof Koh set out the difference between Japan’s and ASEAN’s position in the US-China rivalry. “ASEAN’s value to the world is its independence and neutrality. The moment we become partisan, we will no longer be able to play this important role. This is a fundamental difference between where the US and Japan, and where ASEAN is, vis-a-vis China.”

The Japanese participants addressed that collaboration between the Quad and ASEAN could further strengthen the Indo-Pacific security architecture. However, Prof Tay said, “We are cautious about any anti-China sentiment that does not acknowledge the interdependence (on ASEAN), and over-arrangements that might confine the group to a peripheral role.”

The public forum concluded that while Japan and Singapore enjoy strong bilateral relations, cooperation can be further strengthened in terms of infrastructure cooperation in the region and signing of a potential digital economy agreement (DEA).