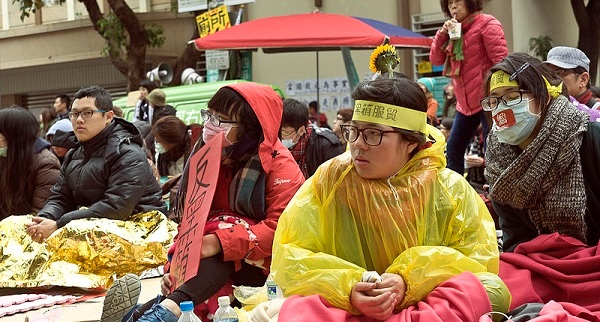 Taiwan has seen protests over a trade deal which it signed with mainland China. The deal, which has not been ratified by the Taiwanese Parliament, would allow Taiwanese and Chinese service companies in fields ranging from banking to beauty parlours to set up shop in the other’s territory.  In protest, Taiwanese students have occupied Taiwan’s Legislative Yuan, while more than 100,000 protestors have thronged the streets.

While the protests stem from a sense of Taiwanese nationalism, another cause of concern is the insecurity facing young Taiwanese. They are worried about job insecurity and falling wages, and are already unhappy about the perceived competition stemming from China. They are therefore unwilling to support any trade deal which would draw Taiwan closer to China.

The protests spell trouble for the already-unpopular Taiwanese President, Ma Ying-jeou, who believes in deepening ties with the mainland. They are also troublesome for China’s strategy of “national reunification” through economic means. China had believed that deepening cross-Strait economic integration would reduce opposition to closer political integration. The protests prove that this may not be the case.

Cross-Strait economic integration will not come to a sudden halt. Taiwanese manufacturers have substantial investments in China, which in turn is Taiwan’s largest trading partner. However, given the political situation, Taiwanese companies may scale back their level of involvement; in 2012, Taiwanese investment in the mainland stood at US$10.9 billion (S$13.8 billion), dropping 16.6 per cent from the year before. Taipei also promotes the “China+1” concept, by which companies investing in the mainland should have a secondary base elsewhere.

Taiwanese companies may therefore refocus their investments towards investing in ASEAN countries. Vietnam, in particular, has received plenty of Taiwanese investment, taking in US$943 million (S$1.2 billion) in 2012, double from the year before. The protests in Taiwan may be problematic for cross-Strait relations, but ASEAN could stand to benefit from Taiwan’s political situation.