Getting firms to take responsibility for the haze 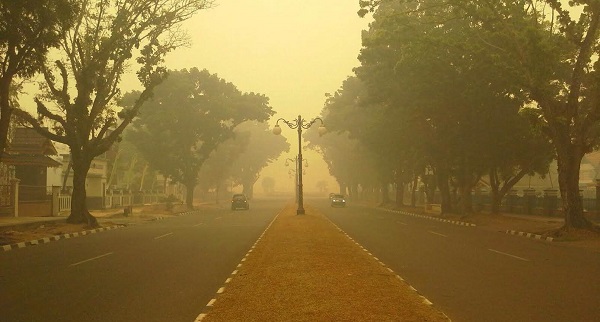 20 Oct Getting firms to take responsibility for the haze

It remains essential to work with the Indonesian government to address the haze. However, while intergovernmental cooperation remains key, there is every reason to expect corporations to do their part to stop the fires and haze or risk being taken to task.

The first steps towards corporate accountability have started. In Indonesia, 12 firms have been named for investigation. The Singapore Government has started to utilise the Transboundary Haze Pollution Act to question and investigate six firms.

Questions were raised about whether such companies still deserve to retain their Singapore Green Label, which indicates that they sell environmentally-friendly products. Within two weeks, supermarket chains acted swiftly to remove the products of one firm — APP (Asia Pulp & Paper Group) — from the shelves.

Some have urged further action —for consumer boycotts and civil legal action to sue for damages. For many years, the Singapore Institute of International Affairs has called for laws and other means to hold corporations accountable for the haze. The current and prolonged bout of haze has generated the public anger and political will to do so. But while important, there are limits to legal action. Indeed, an overemphasis on punishing corporations can have unintended and negative consequences.

The fires and haze result from complex and persistent problems. Going after the biggest companies in palm oil and pulp and paper is necessary, but not a silver bullet. A consumer boycott by Singapore, as some advocate, might be of limited use given the relatively small size of the market, although it is an important symbol that might have a ripple effect in similar markets.

Some companies have taken positive steps to be more transparent and accountable, and can play a positive role to help resolve the problem. The problem is more likely to be resolved when we understand who sets the fires.

Most studies have identified smaller- and mid-scale farmers as the main sources of fires and haze in Indonesia. This is often true even when fires occur on concession lands owned by the big companies.

Larger companies claim that they have little to gain from fires since this risks destroying their plantations. Conclusive proof one way or the other will be hard to establish, especially if cases are brought to Singaporean courts, far away from the site of the fire.

The fact that fires are persistent and recurring in some districts in the provinces is a clear signal that current management systems and fire-fighting capacities are inadequate. More needs to be done — immediately and over the long run — and larger companies are inescapably part of the needed response.

First, more companies can and should further enhance their capacity to detect and put out fires. There are already notable instances where bigger companies expend more resources in trying to put out the fires than anyone else. They also establish ways of cooperating with one another and with local agencies.

A further step would be to take up this responsibility for areas adjacent to their concessions. There may be sensitivities, but this is warranted. Provincial agencies are overstretched, and there is risk that such fires can spread and damage concessions.

Efforts to establish, train and incentivise local community in volunteer fire-fighting will also be important. Currently, many local communities are untrained and ill-equipped to fight fires, leaving them helpless in the face of a crisis that affects them most directly.

Second, preventing fires is also critical. This is especially for peatland habitats, where some two-thirds of the fires occur and result in especially dense and acrid haze pollution. Careful water management is needed as these lands become flammable during the dry season. For the longer term, it will be necessary to restore and rehabilitate burnt, drained and degraded peatlands.

At the industry level, companies should share best practices and coordinate more closely to promote sustainability. One such effort is the Indonesia Palm Oil Pledge (IPOP). Signed at the United Nations Climate Summit in 2014, the pledge commits major industry players to standards and practices that are meant to go beyond the baseline Indonesian laws and even existing certification standards established by the Roundtable on Sustainable Palm Oil (RSPO).

Third, a similar initiative for better corporate practices should be considered for the pulp and paper industry. There are international standards such as the Forest Stewardship Council (FSC) and the Programme for the Endorsement of Forest Certification (PEFC), as well as Singapore’s own Green Label. But major pulp and paper companies can go further on fire management, peatland restoration and rehabilitation, community engagement and transparency.

As with all industry-led efforts, these will need to be monitored and independently verified. They should go above and complement the existing international benchmarks named, and not conflict or undermine existing standards. Even more importantly, there is a need to get other smaller industry players on board.

Fourth, large companies can directly and positively influence what happens in the supply chain. For example, before a large palm oil refinery allows a smaller supplier to sell its crude palm oil, it can audit the plantations and processing to ensure standards for sustainability, and specify that no fires have been used to clear land. This makes for better management practices that can increase productivity and help green the industry as a whole.

Government efforts to prosecute corporate wrongdoing will be a key step forward — especially in Indonesia and potentially supplemented by Singapore’s recent laws. But while wrongdoers are investigated and punished, businesses need to reform practices within the company and throughout the supply chain.

Only with the right mix of sanctions, as well as encouragement and appreciation, can the industry be fully mobilised to be key actors in the overall solution.

Simon Tay and Lau Xin Yi are respectively, Chairman and Executive (Sustainability) of the Singapore Institute of International Affairs (SIIA). This is the second of a three-part series on how governments and corporations can tackle forest fires and the haze. This article was originally published in TODAYon 20 Oct 2015 and also appeared in the Malay Mail Online