Pledge for more aid to Laos to clear unexploded US bombs 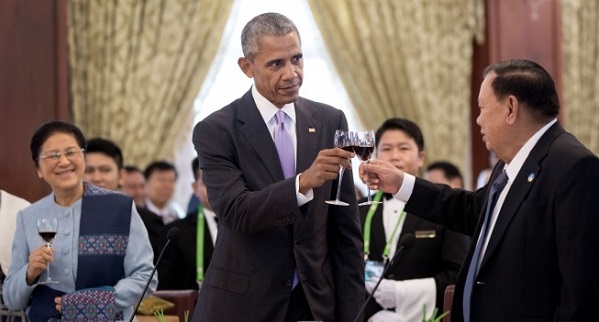 SIIA Chairman Simon Tay was quoted in an article by Tan Hui Yee for The Straits Times on US President Barack Obama’s comments regarding aid to Laos during Mr. Obama’s trip to the country for the East Asia Summit.

US President Barack Obama has announced increased aid worth US$90 million (S$121 million) to help Laos clear unexploded bombs, as he sought to deal with the lasting debilitation from the “secret war” against the South-east Asian nation waged by his country some 50 years ago.

Between 1964 and 1973, the United States rained more than two million tonnes of bombs on Laos in a bid to cut off supplies to communist forces in neighbouring Vietnam with which it was fighting a war.

Since 2009, the Obama administration has pushed for increased aid and cooperation in areas such as education, health and environmental protection for lower Mekong countries, a move seen by some as an attempt to counter China’s influence and presence in the region.

But Associate Professor Simon Tay, chairman of the Singapore Institute of International Affairs, downplayed the effect of US overtures in Laos.

In the long run, Laos’ connectivity to Asean – through its economy or other aspects – would be a bigger factor balancing the Chinese influence in Laos, he said.