Commentary: Why severe haze may return in 2019 and how to mitigate the risk 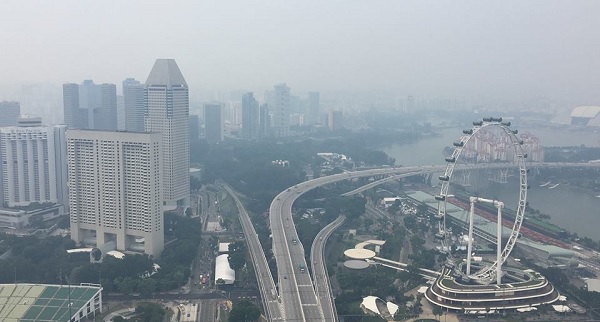 16 May Commentary: Why severe haze may return in 2019 and how to mitigate the risk

By Simon Tay, Wu Huijuan and Aaron Choo
For TODAY

A Haze Outlook developed by the Singapore Institute of International Affairs (SIIA) has assessed that there is a real, although moderate, risk that severe haze will return in 2019.

The prognosis is “amber”; on a scale of red-amber-green. How did we come to this evaluation? What follow up do we hope for?

Haze pollution from land and forest fires has troubled the region for decades, though new efforts to tackle the problem have shown progress. Since the worst prolonged spell of health-hazard air in 2015, there have been almost three years of blue skies. Yet some underlying factors have not been solved, and there is no room for complacency.

Corporations too have played a role, with the agro-forestry sector taking on greater responsibility, with banks and the biggest customers in the supply chain demanding traceability and transparency.

But these conditions are not guaranteed to hold.

Climate change increases the intensity and frequency of extreme weather events, including the risk of fire.

In 2018, destructive fires swept California and, on the other side of the world, Australia.

For 2019, the outlook is for the return of the El Nino Southern Oscillation, which brings hot, dry weather, although this year’s El Nino effect is not expected to be as extreme as some previous years.

South-east Asia is already experiencing incidents of fire. The smoky conditions over the past weeks in Singapore and the southern parts of West Malaysia come from fires in nearby Johor. Further north, Bangkok and Chiang Mai are experiencing severe air pollution. But Johor was not a major contributor to past haze episodes, and the sources of smoke that impact Thailand are different from those in southern Asean.

As such, simply tracking different cases of fire does not determine whether severe haze will recur.

In developing the Haze Outlook, SIIA has instead gathered relevant quantitative and qualitative data, looking at three factors: Weather, peat, and people.

Peatlands are naturally water-saturated, but lose resistance to fire when drained to make way for plantations.

Degraded peatlands were the primary sites of fires in 1997 and 2015, spewing out some of the thickest haze.

According to BRG chief Mr Nazir Foead, who was in Singapore this month to attend the 6th Singapore Dialogue on Sustainable World Resources (SDSWR), peat restoration has reduced hotspots by over 93 per cent in targeted areas.

But BRG’s interventions are only within government-controlled land and not on concessions in the hands of plantation companies.

BRG is conducting a nation-wide evaluation of restoration efforts, but this review will only be finished later in 2019.

In addition, even if degraded peatland has been rewetted, there is still a danger. Some areas could dry out if there is a long drought in 2019, exacerbated by El Nino.

The human factor is also crucial. Since 2015, Indonesian authorities and agroforestry companies have intensified engagement with village communities and strengthened fire prevention, detection, and suppression capabilities. Despite this, Indonesia is a vast country.

If fires break out in difficult-to-reach areas, there is no guarantee that blazes can be extinguished before they spread out of control.

FROM AMBER TO GREEN

Predictions are always approximations. The main purpose of the Haze Outlook is not only to get the prediction right, but rather to draw the attention of the public, policy makers, and the private sector to this emerging situation so that timely and proactive actions can be taken.

Indonesian authorities say they have made progress in convincing large companies to stop slash-and-burn agriculture. But the bigger challenge is reaching out to smallholders living in remote areas.

Speaking at the SDSWR, Mr Franky Oesman Widjaja, Chairman and CEO of Golden Agri-Resources, said it is easier for companies to invest in sustainability than for smallholders to do the same.

In order for small farmers to change their practices, they must see tangible benefits, rather than simply being told to stop burning.

There are government, corporate, and NGO initiatives working to give smallholders better access to financing and improve their agricultural methods, thus improving both their yields and profits. This serves to advance better adoption of environmentally and socially-friendly practices, and helps smallholders achieve sustainability-related certification.

Currently, many smallholders as well as mid-sized players often struggle to meet certification criteria on their own.

A case in point is the Roundtable on Sustainable Palm Oil (RSPO), which is now developing an Independent Smallholder Standard for oil palm growers. If more smallholders achieve certification, it could help open doors to international markets that recognise certifications and further spur widespread acceptance of sustainability among small and mid-sized actors in the supply chain.

In 2016, the World Bank estimated that the 2015 haze crisis cost Indonesia some S$21.8 billion. A forthcoming study by Nanyang Technological University, previewed at the SDSWR, calculated that the economic damage to Singapore was around S$1.5 billion.

A survey conducted as part of the study further suggested that Singaporeans, Singapore Permanent Residents and Malaysians are willing to “pay” for clean air, if this can lead to a haze-free environment.

The 10 member states of Asean have set the ambitious target of a haze-free Asean by 2020.

In order for the grouping to achieve this goal, stronger interventions are needed to mitigate the risk of haze, with multi-stakeholder action involving governments, NGOs, the private sector, and local communities.

Only then can we replace business-as-usual with a sustainable value chain, and go from amber or moderate risk of haze, to green.